LAS VEGAS — Advertisements are popping up along the Las Vegas strip this week that challenge Amazon Web Services’ position in the cloud market — and the perpetrator is competitor IBM. As an estimated 9,000 IT pros have come to Las Vegas for AWS re:Invent, Amazon’s second cloud conference, IBM has taken the opportunity to promote its cloud services and partnership with SoftLayer, saying that the company powers 270,000 more websites than Amazon.  The ads additionally state that “The IBM cloud offerings also support 30% more of the most popular websites than anyone else in the world.”

Conference attendees have been buzzing about the ads, which have adorned shuttle buses from the hotels, have been digitally projected across the Fashion Show Mall next to Treasure Island hotel and take up small billboards in hotel hallways, including the Venetian, where AWS re:Invent takes place. Andy Jassy, senior vice president of AWS, addressed the ads during today’s keynote address.

“It’s creative, I’ll say that,” Jassy said. “It’s a way to jump up and down … to try to distract customers.”

No one would argue that IBM has a bigger cloud business than AWS, he added.

This ad campaign highlights how the cloud market is heating up rivalries among vendors. As the industry and the products mature, vendors are looking to rise to the top, fighting against competitors for enterprise customers and market share.

Similarly, in August, Microsoft took shots at Google on its blog, citing that the company has many “hidden costs.” 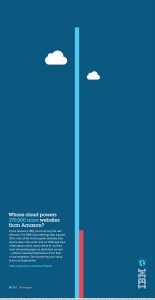