So I was very excited when IBM officially launched its general purpose public cloud service. It was a validation of the cloud model for the enterprise; it was a chance to see what one of the premier technology vendors on the planet would deliver when it put shoulder to wheel on this exciting new way to deliver IT.

Its got a growing user base too: check out the “Profile” screenshot at the bottom; not only do you get to see your IBM Cloud account, you get to see all your IBM friends, too- as of this writing, IBM’s cloud has 729 users running 2436 instances, 578 block stores and 666 images.

Turns out it’s pretty much feeling its way along, just as Amazon Web Services (AWS) was 3-4 years ago.  Its…um…not polished, but it works. It’s a true public cloud experience, even if the the pricing is logarithmic in scale rather than incremental (goes from “quite reasonable” to “Oh My God” fairly quickly). You click and provision storage, instances, and so on. But it feels a little raw if you’re used to RightScale, AWS Managment Console and so on. It’s very bare bones at the moment.

It’s also abundantly clear that the IBM Smart Business Cloud- Enterprise (SBC-Enterprise) is exactly the same as the IBM Smart Business Development and Test Cloud. The transition to “enterprise class public cloud” is simply hanging a new shingle on the door. See the screenshots below, they haven’t really finished transitioning the brand on the portal pages and it’s all over the documentation too. The test and dev cloud and the SBC-Enterprise cloud are one and the same.

But that’s fine by me- if IBM wants to take their dev cloud infrastructure and call it Enterprise, they can do that. I’m not aware of any conceptual reasons for not doing production in a cloud right next to where you do test and dev, besides the expectations for uptime and support.

What’s a little crazy is how much uber-complicated stuff is baked right in, like Rational Asset Manager and IDAM even though actual use is a little creaky. This highlights the main difference between the approach IBM is taking and the approach AWS took. The very first thing you do on creating your IBM profile and logging in at http://ibm.com/cloud/enterprise is manage users. The last thing you do (or can do, I couldn’t even figure where to do it) is check your bill and see how much you’ve consumed and how much you’ve paid. That’s almost the reverse of the AWS experience- again, nothing really wrong with that.

Other notable postives: status updates and notifications about the service are baked into the dashboard and appear at the top of the screen. When I was using it, there was a helpful suggestion to pick the Boulder CO data center because of heavy use at IBM’s flagship cloud DC in Raleigh. The provisioner even automagically put Boulder at the top of the list for me. Does anyone else remember when AWS didn’t even have status dashboard? I do.

The web portal is reliable, fast and built on solid, modern open standards, no “Choose your browser with care young padawan” here. Security is superficially reliable: You are forced to create a 2048- bit RSA keypair for your first Linux instance and strongly encouraged to do so for each additional one; the Windows instances enforce complex passwords and you don’t get to be Administrator at provisioning. Only ports 22 and 3389 are open, respectively. After you login and start monkeying around, of course, you are on your own.

For the brief handful of hours I used it, the connection and response time were rock solid and quite acceptable. Disk I/O was fine both on the instances and to the attached block stores. Only a little weirdness when patching or installing software. Licensing all brushed under the rug, as it should be. Getting a test website up and running was trivial. Instances start with 60GB local storage and block stores start at 250GB. The REST APIs? Probably OK. I, uh, sort of ignored the API part of it. But they’re there.

However, it’s easy to see this is early days for an end-user service. I got the always-helpful “This is an error message: the message is that there is an error” at random. Provisioning a stock SUSE Enterprise instance reliably took 6-7 minutes each time. The Windows instance took north of 25 minutes every time (on my first try I used the delta to fumble around with SUSE and vi and get VNC going because I have apparently devolved into a helpless monkey without a GUI).

SUSE was no-password SSH, username “idcuser”(short for ‘IBM Dev Cloud User’, I’m guessing). When I created a privileged user and went through VNC, I couldn’t sudo until I went back to SSH and set a password. idcuser can sudo in SSH without a password but not over VNC, apparently. Which is fine, I’m glad it doesn’t have a default root password, that’s a Good Thing (TM) but I had to figure that out. AWS just gives you a stock SSH session and everyone knows to change the root password first. IBM’s instructions exclude mention of the root password (“sudo /bin/bash/” in SSH instead).

I couldn’t save my modified instances as customized images to boot later- the SUSE image showed up in my repository after several tries but wouldn’t relaunch. I eventually managed to save a working image after a few days. The Windows image just refused to save; I gave up after a half dozen tries. There’s no way to upload my own images; I’m stuck with a collection of RHEL, SUSE and a lonely Windows Server 2008 for a portfolio; I’d have to waste a lot of time to replicate my own VMs from that and if I wanted to run any other OS forget it.

Signing up was pleasantly easy, but I didn’t get access unless a (very helpful) IBM rep contacted me and sent me a welcome kit via email. I was also mistakenly signed up for Premium Support Services without asking to be, which is one of those automatic eye-watering cost multipliers I mentioned before. Fortunately IBM has been quite responsive and I’m only getting charged for what I use. Anyone remember when AWS didn’t even have a support response option? I do. Again, IBM is working backward (in this case kind of a good thing).

All of this, most especially the lack of freedom in managing a VM library (couldn’t save, couldn’t upload) and the distinctly unfinished branding effort going on put IBM’s cloud in the “nice idea so far” category. It’s going to take some time and some effort for this to be anywhere close to the capabilities or integrated services AWS has. Only a true enthusiast would want to run anything in production on this. It’s still definitively not a enterprise-class cloud environment for running workloads.

It probably will be in time; unlike AWS, IBM doesn’t have to invent anything. I suspect the real issues at IBM around this are in tying in the appropriate moving parts and adding features with an eye to the end-user experience. IBM is historically not good at that, which is probably why AWS got there first. Amazon is good at that part. Scale matters too- IBM is one of the worlds largest data center operators in its own right; Amazon rents space in other peoples. If IBM ever runs into growing pains, as AWS has, it is going to be on a completely different plane. I’d expect them to screw up the billing before they screwed up operations, for example.

Anyway, check out the screenshots. When I get my invoice at the end of the month, I’ll tell you all how much this cost me. If it was over $10 I’ll be shocked. 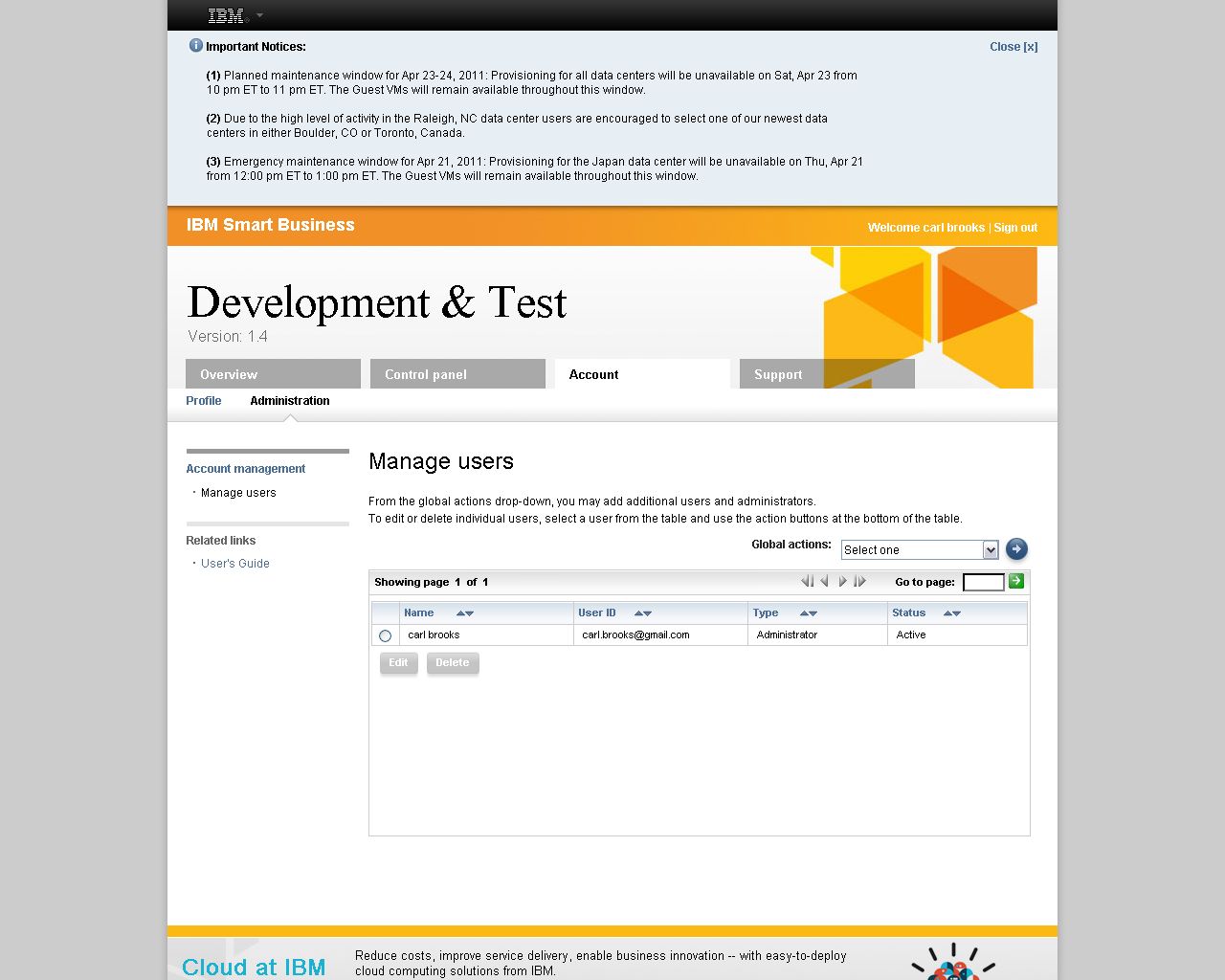 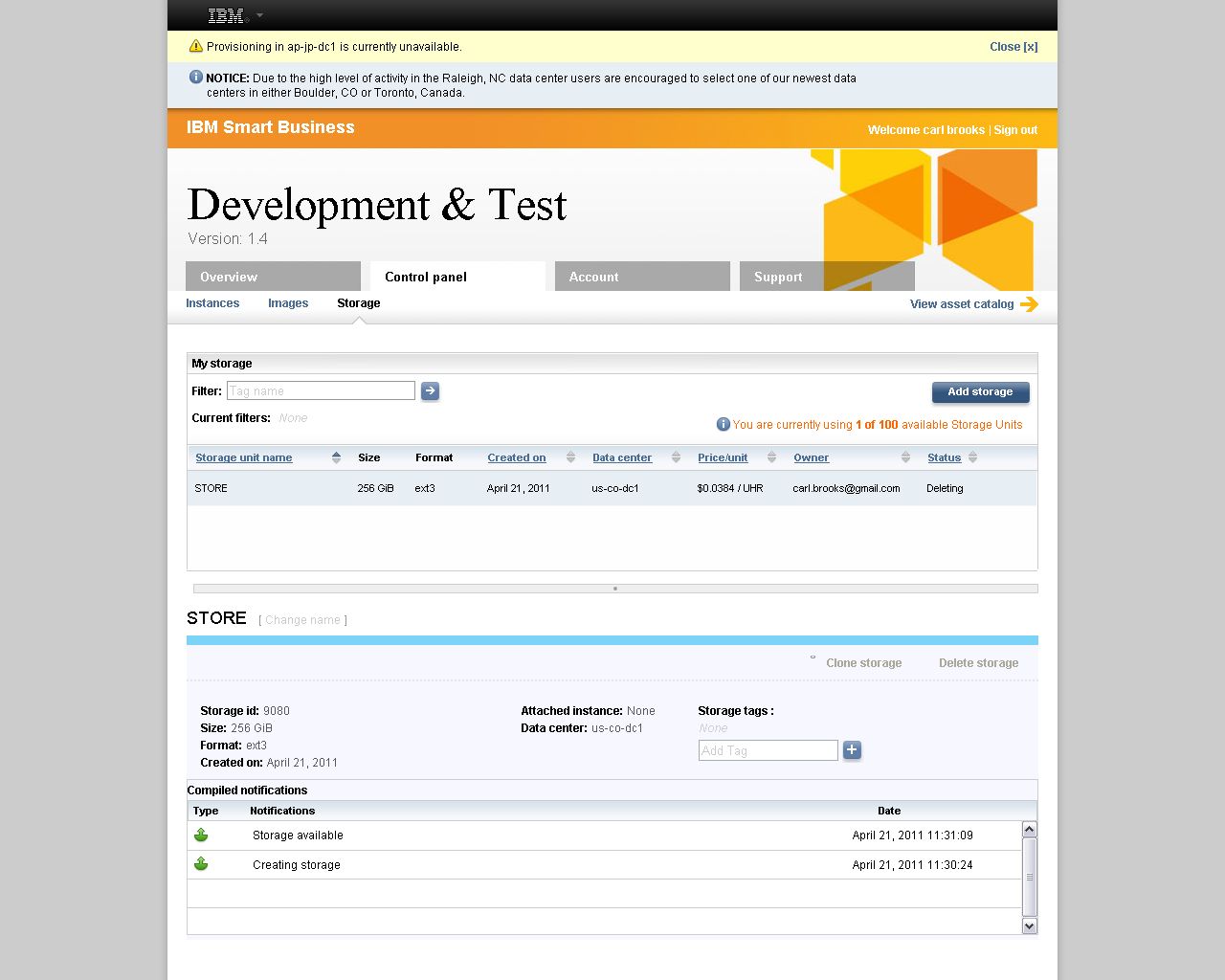 My Profile! and 729 other IBM friends! 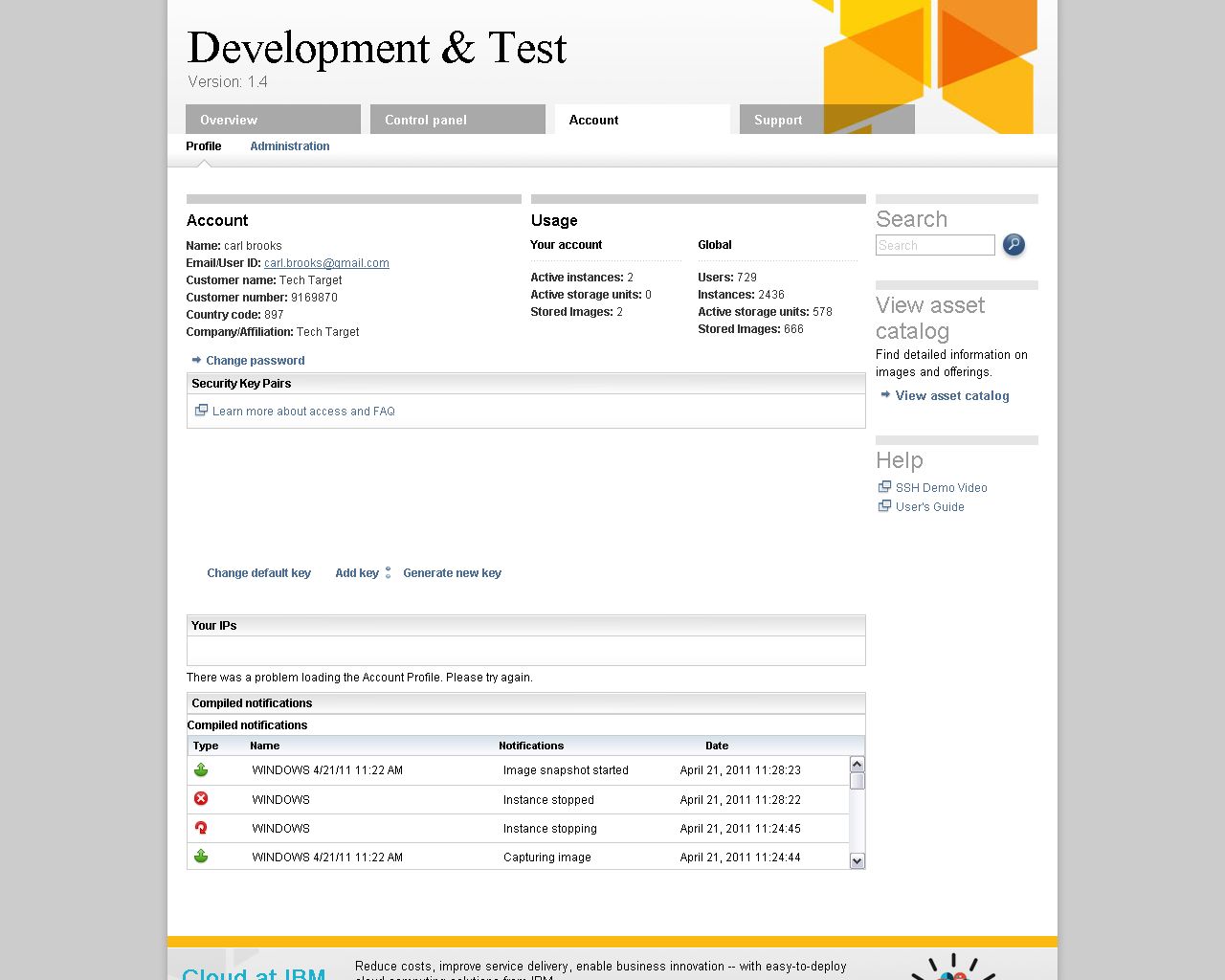 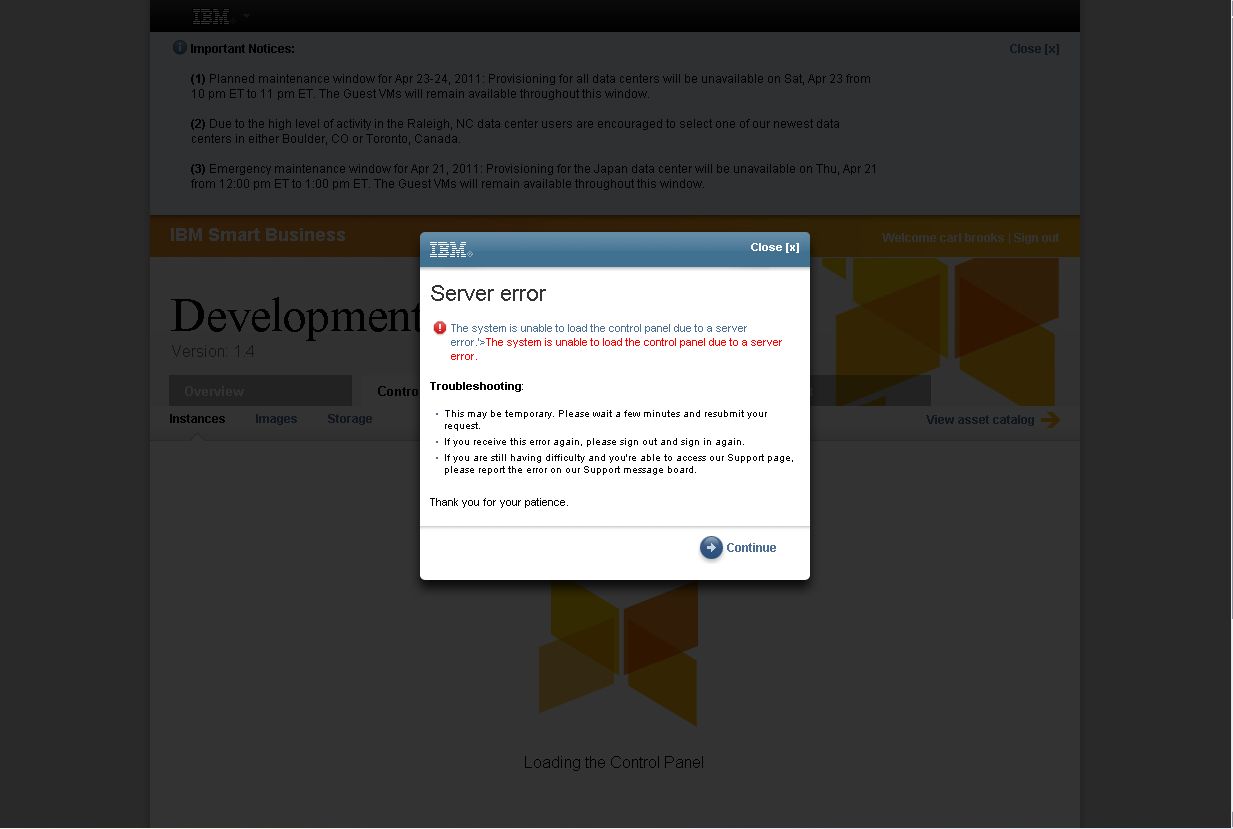 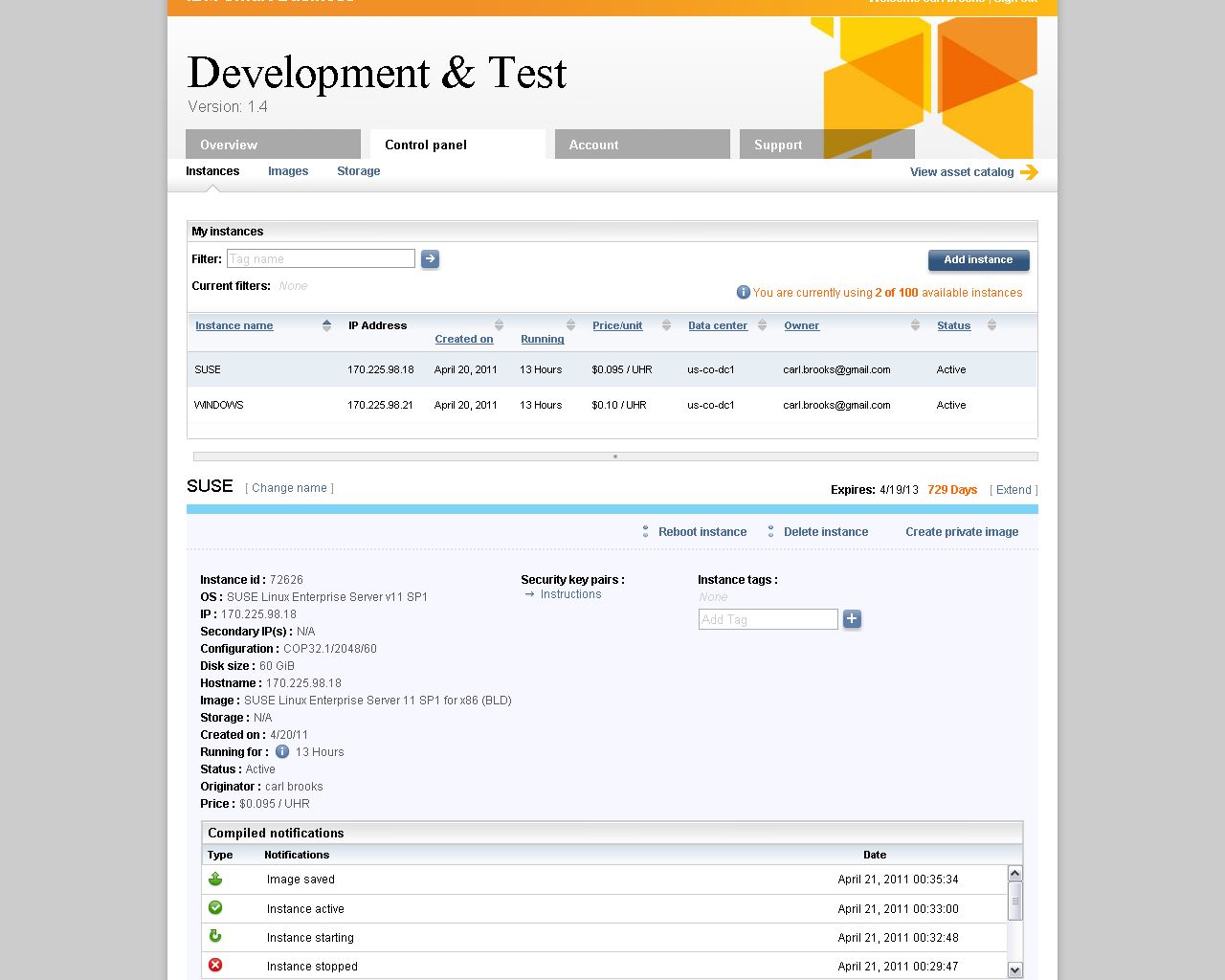 UPDATE: Due to a promotion campaign that I was apparently grandfathered into by a few days or a week, which ends June 1, my test-drive for the IBM Cloud was free. A quick login and peek around shows the current number of users at 864, more than 100 over a month ago, but 2962 running instances, demonstrating an uptick in active customers but also the fungibility of demand.

They’ve updated the design to scrub away more of the IBM Smart Business Development and Test Cloud branding and I was finally able to launch my saved SUSE image. Progress!