Thank you for joining!

In the rush to cloud, enterprise IT can't forget traditional IT best practices 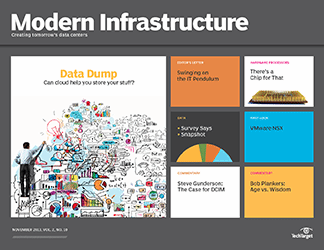 This article is part of the Modern Infrastructure issue of November 2013, Volume 2, Number 10

Alan Greenspan once characterized the dot-com bubble of the 1990s as "irrational exuberance." To me, much of the rush to the cloud is the same. In our excitement we forget all the lessons we learned, often the hard way, in our own data centers. A wonderful example of this is cloud-based storage provider Nirvanix. Founded in 2007, it announced in September that it was discontinuing its services. Users had two weeks -- yes, just two weeks -- to retrieve their data. Enterprises are notoriously slow to change, so finding a new cloud storage provider in 14 days would be incredibly taxing by itself. On top of that, bandwidth is an issue. Assuming that you could get 1 Gbps of bandwidth out of Nirvanix and into another provider, moving 100 TB of data would take 9.5 days. Getting a reasonable amount of bandwidth is a big assumption, too. Like all cloud providers, Nirvanix probably relies on oversubscription of its infrastructure, making this problem the modern equivalent of a run on a bank. With everybody trying to retrieve their data ...

Features in this issue

Columns in this issue