If we believed the marketing and vendor hype, we'd think every enterprise was abandoning its entire data center infrastructure in the name of cloud computing. Most of us realize, however, that vendor claims must be taken with a grain of salt -- everyone has an agenda. Still, the question remains: How is cloud computing in all its facets -- public, private and hybrid -- penetrating the enterprise? 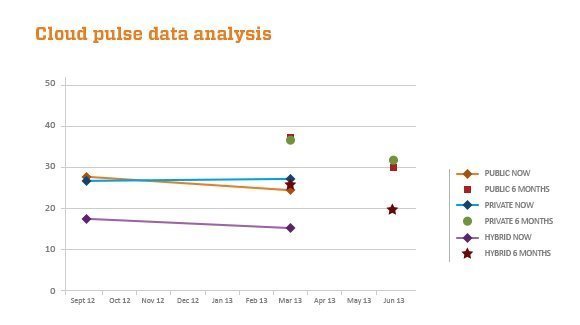 TechTarget's Cloud Adoption Index uses survey data to gauge cloud migration activity, as well as future plans in a variety of areas. By tracking our index, you can follow adoption over time and see how new standards, services and industry needs are leading the push into the cloud -- and how your enterprise compares.

Public and private cloud both have reached about 25% penetration within IT, according to the Cloud Adoption Index, with hybrid cloud adoption lagging at 16%. And, despite what vendors want you to believe, survey data shows that adoption rates are not rising steadily, but that from September 2012 to March 2013, they could be flat to down. It's important to note that, with this index, if all respondents ran all IT workloads in the cloud, the index would equal 100.

Can all this buzz be skewing enterprise IT's adoption expectations? Perhaps. A fair number of survey respondents in September 2012 projected moving IT workloads to the cloud in some form over the next six months. In actuality, however, data from the March survey does not support this.

So, what's stalling adoption? Why did respondents who expected to be in cloud six months ago not get there? Thirty-four percent of survey respondents cited a lack of control over the cloud environment as the main reason for non-adoption, while 33% feel their data centers are not virtualized enough to be ready to move to the cloud. Security still weighs heavily on 31% of respondents' minds as a reason to forgo cloud computing.

It seems cloud service providers still have some convincing to do when it comes to enterprise IT. But as cloud management tools advance and data centers become further virtualized, it may only be a matter of time until actual cloud adoption catches up with the noise.

About the author
Michelle Boisvert is executive site editor for SearchCloudComputing, SearchWindowsServer and SearchDataCenter. Contact her at mboisvert@techtarget.com.