The increased adoption of public cloud services and agile programming methodologies has made it clear that improved cooperation between software developers and IT operatives is a necessity.

These two groups have a radically divergent worldview: Developers want immediate access to new computing and storage resources, along with accommodation of frequent minor app updates. IT operations groups want stability and reliability; they worship the status quo of the data center’s networked resources and software.

DevOps is the name of a nascent IT discipline that aims to bring order to this chaotic world of application/service development, testing, deployment, scaling and monitoring, as well as ensure software quality, security, availability, reliability and performance.

Commissioning new server instances -- even virtual ones -- requires an Act of Congress. Sysadmins and QA teams treat new apps and updates like they carry the bubonic plague, erecting complicated change-management systems to protect what they believe is a brittle infrastructure. Such a mindset mismatch can lead to conflicts and reduce operational efficiency; this is where DevOps factors in.

James Urquhart, market strategist for the cloud computing service provider systems unit at Cisco Systems, is an early DevOps prophet and thought leader who has noted that "up until now, IT has worked from a server-centric operations model; cloud is an application-centric operations model." According to a blog post from John Allspaw, VP of technical operations at Etsy, "DevOps is what some people are calling the renewed cross-interest in development and operations collaboration." 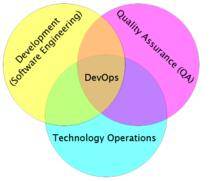 According to Hoff, Allspaw considers DevOps to "really be about tools + culture + communication." The term DevOps doesn’t appear in Google Trends until Q4 of 2010, but DevOps practitioners already have plenty of monitoring and management tools for public and private Infrastructure as a Service and Platform as a Service clouds to choose from. Here’s a list of some of the more popular ones:

Migrating computing resources from a traditional on-premise data center to a public cloud -- and the attendant budgetary transfers -- is likely to have a traumatic effect on an organization’s operations and QA teams. Unchecked, the trauma probably will lead to a more defensive posture and a toxic relationship with development groups.

As James Turnbull, director of operations for Puppet Labs, asserts in a blog post on what DevOps means to him: "[F]or me, DevOps is about people and nature of the environment you want to work in. The best thing about the movement for me is that it is trying to foster behaviors and environments where people work together towards joint goals, rather than at cross-purposes or at odds. That’s a world I’d much rather use my skills in."

DevOps doesn't have to be hard; use this home lab to see it in motion

Where cloud, containers fit with DevOps and app modernization