The Gartner Hype Cycle is a powerful tool for understanding where new technologies are with regard to their acceptance in the mainstream. And Gartner's Hype Cycle for Cloud Computing, 2012 report raises some interesting -- and often confusing -- points for cloud computing adoption.

There is a big difference between the description of phases of the cycle on the curve, such as "Trough of Disillusionment," and the report's table of contents, which labels sections by describing the transition between phases. The curve shows Infrastructure as a Service (IaaS) on the upslope of the trough, yet Gartner places it in a section titled "Sliding in to the Trough." This creates two very different perceptions.

Moving aspects of the technology along the curve prematurely can mislead more conservative adopters to believe the technology is more mature and understood than it really is.

Another challenge in applying the cloud hype curve to the cloud adoption market is that the report takes a high-level approach to various technologies and bundles them into the overall cloud discussion. Unfortunately, this approach is so broad that it encompasses technologies that are not uniquely cloud-related, such as hosted email.

By definition, the National Institute on Standards and Technology's (NIST's) cloud service models -- SaaS, PaaS and IaaS -- are further split into subcategories, such as Database as a Service (DBaaS) and Business Process as a Service (BPaaS), that don't add any specific value to the analysis. In retrospect, DBaaS should be identified as a component of PaaS, and BPaaS should be included in SaaS. While these divisions may be interesting to some audiences, they obscure the state of adoption of core cloud technologies.

The complexity introduced by these extra technologies also obscures the absence of other, more important, technologies, such as service-oriented computing.

When you filter out Gartner's Hype Cycle data points that aren't included in NIST's definition of cloud computing and focus on those that are, you're left with the three cloud service architectures: SaaS, PaaS and IaaS as well as the four cloud deployment models: public, community, private and hybrid. To get a clear view of the market, a few assumptions are necessary.

The "PaaS" data point refers to public PaaS. "Private cloud computing" is denoting private IaaS. When Gartner mentions "IaaS," it means public IaaS. The generally accepted view in the public/private cloud discussion is that these two terms imply there can be a difference when a service model is deployed in a public or private manner. However, the NIST definition does not make this distinction. Therefore, the hype curve data points of Gartner's report reflect the market perception rather than the proper definition. 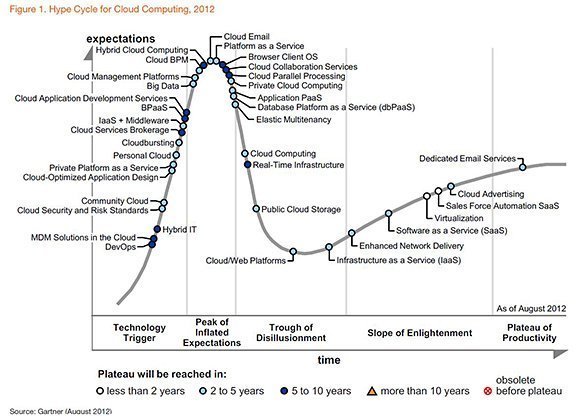 The placement of SaaS in Gartner's Hype Cycle on Cloud Computing, 2012, is correct; however the addition of technologies like SFA SaaS is not necessary. Public PaaS at the peak does not match the facts on the ground. PaaS is still in its infancy despite the fact that vendors have been selling products such as Windows Azure, Google App Engine and Force.com have been in the market for several years now.

On the other hand, in the Gartner Hype Cycle, public IaaS is approaching the peak. While specific implementations adhere to the principles of NIST's cloud definition, public IaaS has largely been adopted as a self-service hosting platform. This likely won't end well for conservative customers expecting the same type of reliability as traditional hosting options.

Private Infrastructure as a Service has been redefined to mean fully virtualized data centers with more sophisticated management tools. In both public and private cloud, there has been too much emphasis on the infrastructure -- not the service aspect -- of cloud discussions.

The hype cycle is clearly in play for cloud computing and a proper analysis can be valuable to potential cloud adopters. However, by moving aspects of the technology along the curve prematurely, it can mislead more conservative adopters to believe the technology is more mature and understood than it really is. When implementations fail, there will be a negative impact on enterprises adopting cloud -- and for the overall future of the technology.

About the Author:
Mark Eisenberg has been doing mobile app development since 2005. He joined the nascent Windows Azure sales team at Microsoft despite being an early cloud skeptic. Now, after embracing the cloud and its technological potential, he combines his cloud and mobile expertise with his technological background to help clients realize real value from their technology investments. Mark is also a seasoned business development professional with over 20 years of experience. He started his career in software development and has since maintained his technology edge, most recently adding cross-platform mobile development skills. His sales career began when he joined Intel's channel, and has included positions at other communications-focused firms prior to Microsoft.