The increasing market share of users adopting a BYOD workplace means IT departments must develop line-of-business applications that run under iOS, Android and Windows RT operating systems, as well as on conventional laptop and desktop PCs. Additionally, constraints on IT spending are leading to increased adoption of pay-as-you go public cloud computing and data storage services. The loss of Wintel's historical ubiquity threatens Microsoft's bottom line and has the potential to bust IT app development budgets.

The solution is a single set of tools and languages that enables developers to use existing skills to create Web-based, data-driven, multi-tenant apps that run without significant modification on the most popular mobile and desktop devices. These apps also need simple user authentication and authorization, preferably by open-source identity frameworks, such as OAuth 2.

Guthrie explains the move in his Windows Azure and Office 365 blog post:

Even better, the web and workflow apps that developers create to extend SharePoint can now be hosted on Windows Azure. We are delivering end-to-end support across Office 365 and Windows Azure that makes it super easy to securely package up and deploy these solutions. 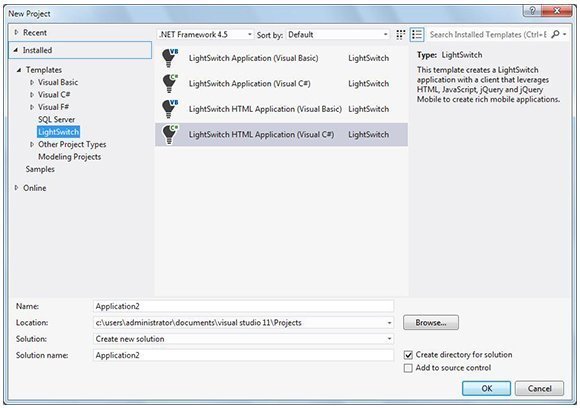 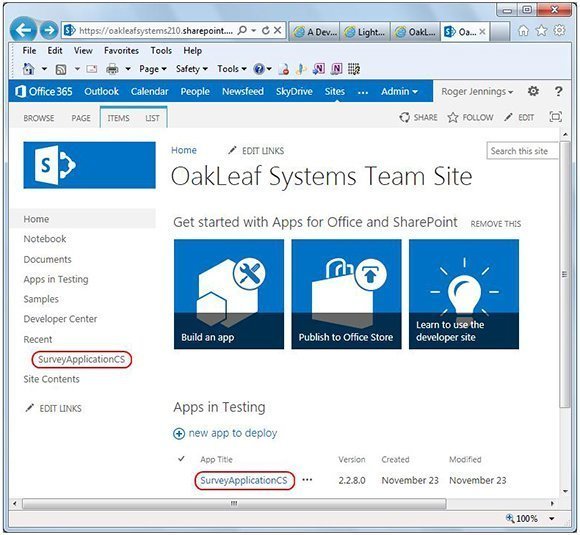 Developers can use LightSwitch HTML Client Preview 2 to build SharePoint 2013 apps and install them to an Office 365 Developer Preview site. Deployment to SharePoint Online, offers "simplified deployment, central management of user identity, app installation and updates, and the ability for your app to consume SharePoint services and data in a more integrated fashion," according to the LightSwitch team in a blog post. "For users of your app, this means a central place for them to sign in once and launch modern, web-based applications on any device for their everyday tasks," the post added (Figure 2).

[T]he [auto-hosted] and [provider-hosted] models are different in a number of ways: 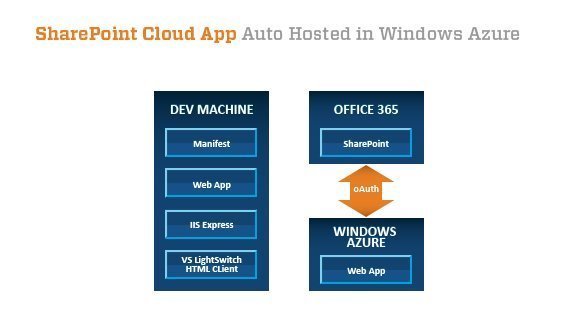 Deploying and running the SurveyApplicationCS project 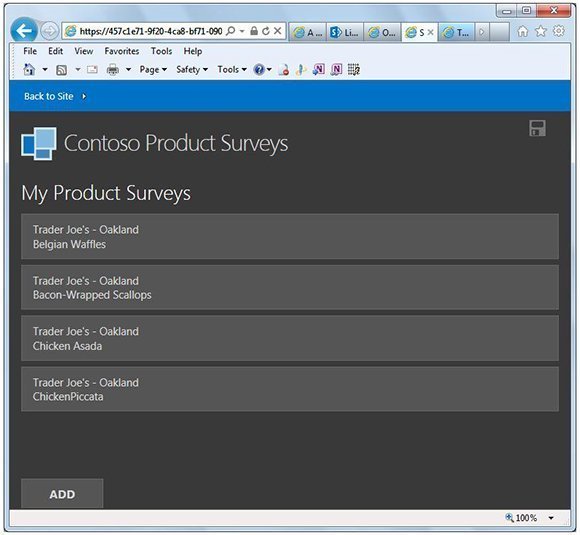 Figure 4. The main form of the SurveyApplicationCS project for a logged-on sales representative. Contoso Product Surveys is a multi-tenanted application that depends on OAuth 2 authorization to display survey results for individual sales reps.

After testing on a local machine, the developer would publish the application to SharePoint Online and then deploy it as a SharePoint app by clicking the + New App to Deploy link (see Figure 4) and specifying the app package for the current version from the local machine to upload to SharePoint. Figure 4 shows the SurveyApplicationCS app's main (landing) form when opened from SharePoint. The URL specifies the endpoint of the Windows Azure Web role (o365apps.net) and the SharePointAppWeb (http://oakleafblog.blogspot.com/2012/11/lightswitch-html-client-preview-2.html).

Figure 5. A detail form for one of the products added to the original tutorial's generic list. Customization also includes a Survey Date field added with four lines of C# code. 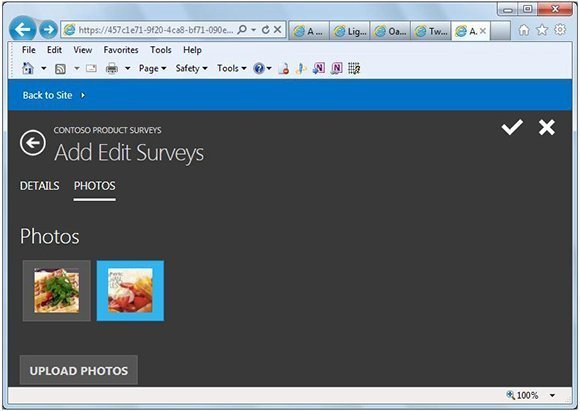 Figure 6. The Photos form lets you display a full-size image by clicking a thumbnail tile. Clicking the Upload Photos button opens a form that allows sales reps to add a photo from a file on the client device to the collection.

Only four lines of C# or VB code are required to implement the main and details forms. However, uploading photos with the Web API requires 32 lines of JavaScript for a custom control. Displaying the photos to illustrate the shelf space assigned to the food products requires dropping in 120 more lines of standard C# or VB source code from the tutorial. 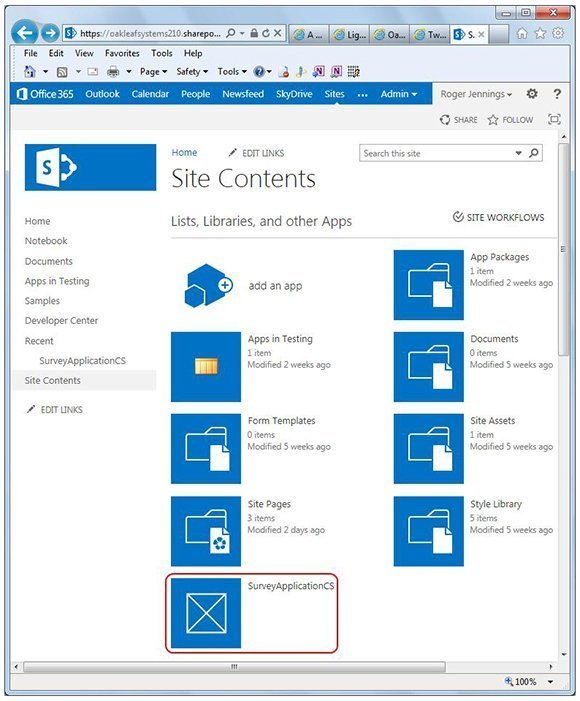 Figure 7. Users must sign in to SharePoint Online for authorization to invoke LightSwitch HTML Client apps deployed to SharePoint, which are represented by tiles on the Site Contents page.

SharePoint cloud-hosted apps use Windows Azure Access Control Services (ACS) as their authorization server, which provides a security token service (STS). Launching the LightSwitch HTML Client application from SharePoint automatically requests a context token from ACS that contains information about the current authenticated user. To support multi-tenancy in SurveyApplicationCS, the user's name filters items in the main page's My Product Surveys list to show only his or her surveys. 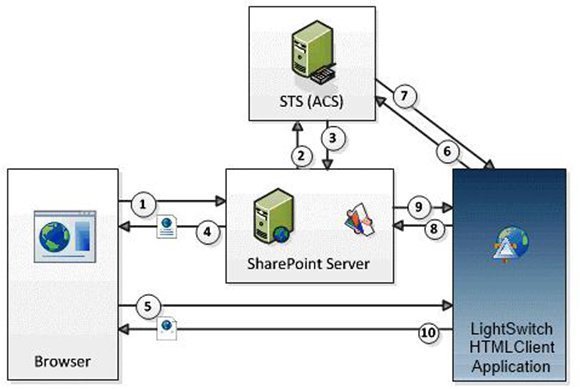 Figure 8 from the OAuth for authentication and authorization with SharePoint MSDN topic illustrates data flow between the app's components the LightSwitch HTML Client orchestrates.

Microsoft's concentration on componentizing its software offerings to simplify architecting and programming departmental applications has been responsible for much of the company's success in the enterprise IT market. In the same vein, the Windows Azure, SharePoint Online and Visual Studio LightSwitch teams have integrated these platforms to enable .NET developers to quickly piece together device-agnostic Web front ends with minimal programming effort.

Developers with Visual Studio 2012 skills can cobble together this app in an hour or less -- allowing them to quickly deploy it to a variety of devices running Windows, iOS and Android.

Roger Jennings is a data-oriented .NET developer and writer, a Windows Azure MVP, principal consultant at OakLeaf Systems and curator of the OakLeaf Systems blog. He's also the author of more than 30 books on the Windows Azure Platform, Microsoft operating systems (Windows NT and 2000 Server), databases (SQL Azure, SQL Server and Access), .NET data access, Web services and InfoPath 2003. His books have more than 1.25 million English copies in print and have been translated into more than 20 languages.