Virtualization has changed the way enterprises deploy server and storage resources, but the technology's effect on networking, at least until now, has been less significant. As a result, network bottlenecks continue to be a challenge in hybrid cloud deployments, where enterprises need to connect and orchestrate workloads between private and public clouds.

Businesses want to deploy a cloud infrastructure with a few mouse clicks, and virtualization promises that capability. Like other virtualization technologies, software-defined networking (SDN) has the potential to simplify network deployments by separating system software from network hardware. SDN decouples the software control panel from the forwarding hardware nodes, such as routers and switches. This allows organizations to work with commodity routers rather vendors' proprietary, and often expensive, devices.

But despite these benefits, SDN hasn't yet been a cure-all for hybrid cloud networking woes.

Theoretically, SDN enables organizations to configure network devices with greater flexibility and agility. In the past, applications were hard-wired and tightly connected to specific communication lines. In SDN architectures, admins should be able to create new network connections easily as needed -- but this is where SDN's promise has not yet met with the current realities of hybrid cloud and its network bottlenecks.

Traditionally, a new network system replaced an old one. But with SDN, the physical network connections remain in place, and virtual layer is applied on top. This means businesses essentially manage two networks rather than one. Instead of streamlining configurations, this design increases management complexity. 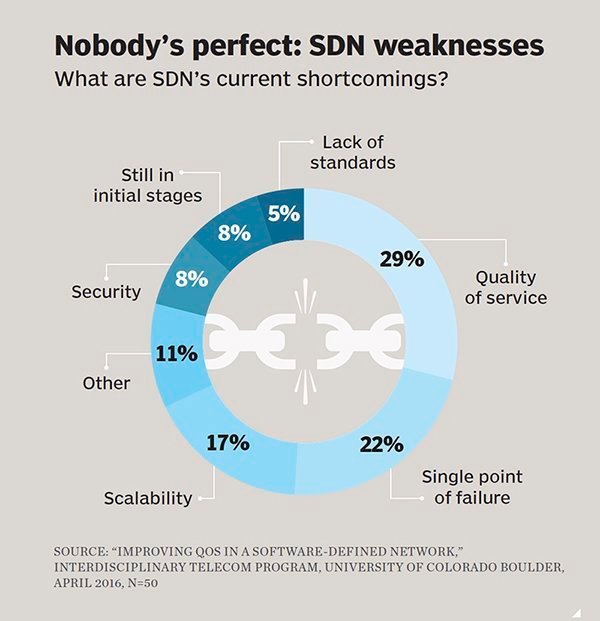 Where does SDN fall short?

In addition, server and storage virtualization has been relatively easy to implement because these systems are usually located within the confines of a data center. But network devices span out from the data center to multiple end points, increasing the number of potential configurations. And, as organizations embrace public and hybrid cloud, the number of potential end points rises.

The importance of network analytics

As networks become larger and more complex with public and hybrid cloud deployments, it becomes more challenging to identify trouble spots. This makes network analytics critical, according to Kerravala. Currently, network operators feel overwhelmed by the number of alerts that flood their consoles. Artificial intelligence and machine learning have the potential to solve such problems. Management systems built with these capabilities can perform much of the preliminary work, such as separating the insignificant alerts from those that actually point to possible problems. But again, these tools are still in the early stages of development.

But cloud computing dramatically changed how IT infrastructure processes information. Modern workloads are no longer tightly tied to specific hardware; they dynamically move among different systems. Traffic patterns vary so greatly that monitoring a network entry and exit point provides little value because the incoming and outgoing data changes dramatically.

"Right now, enterprises have little visibility into what is happening on their SDNs," said Brad Casemore, research director at IDC.

With cloud, system administrators can allocate server resources with a few mouse clicks, rather than manually entering complex commands. To make this capability possible, vendors add to base server functionality, which takes time. For example, Chef and Puppet run on top of virtualization and cloud abstraction layers from vendors such as VMware, Microsoft and Red Hat. SDNs have an emerging virtualization layer, but no cloud abstraction or orchestration software yet. And while companies such as Cisco and VMware are working towards these capabilities, adding network bandwidth is still a somewhat tedious process for cloud administrators.

Eventually, SDNs will allow cloud admins to allocate new network resources just as easily as server resources -- but right now it is simply immature. VMware launched in 1998 and about ten years passed before tools such as Puppet and Chef emerged. SDNs appeared in 2011, so the ecosystem around the technology is still in its early days.

The end result is that much of SDN management is manual rather than automated; it requires input from network experts. The idea of users provisioning network bandwidth to support new applications -- a model that's common with cloud servers and storage -- is still a wish-list item. Until the SDN market matures, particularly around auto-configuration network services that dynamically adjust to each application, adoption will lag, and network bottlenecks will remain in many hybrid cloud deployments.