We've all heard that cloud computing can be cheaper than paying for your own server. But the dirty little secret is that, because almost everything is priced à la carte, comparison shopping can be akin to prying a final number from your local car dealer.

I found this out recently when I got a monthly bill from Amazon Web Services for $37. My past bills had been only a few pennies a month for some test virtual machines (VMs) I had placed on their servers; how could I run up $37 worth of services? The culprit ended up being the virtual private network (VPN) I had forgotten to turn off when my tests were complete. Oops.

And therein lies the challenge for any IT manager on the hunt for cloud savings: to read the fine print and understand what is billable and when the meter starts -- or in my case, stops -- running.

The complexities of Amazon's cloud pricing
Amazon's pricing is so complex they have devoted an entire website to calculating cloud costs. You enter the region you wish to use for storing your environment, and plug in the number of VMs you are going to run and how much storage and data transfer you plan on using, and it will interactively show you an estimate of your bill. It isn't pretty, and you will need to spend some time plugging in various numbers, but it will provide a way to potentially avoid any billing surprises.

The calculator has lots of annotations to help you enter the right information, and it also spells out all the various promotional rates (such as 25 free machine hours for the first Simple DB instance) when appropriate. The only downside is that you have to be familiar with Amazon's many, many different service offerings.

What's admirable about Amazon's calculator is its transparency; while some competitors require a customer ID to be entered before calculating prices, Amazon doesn't limit usage to existing customers. There are also premade pricing templates to get you started, such as for a sample Web app or marketing website. 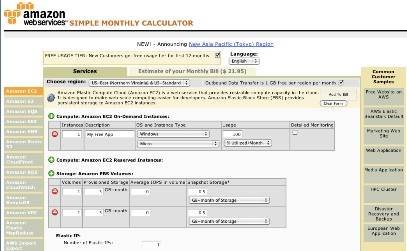 Fixed prices in the cloud
If you crave a bit more simplicity, a good place to start is with vendors that offer a fixed monthly pricing plan. Skytap starts at $500 a month for its basic environment, and CloudShare's Pro plan is $49 per month. That $49 will get you up to six VMs that can use up to 10 GB RAM and 300 GB of disk . If you can make use of their premade OS templates that run a variety of Windows and Linux operating systems and applications, this can be quite a bargain. CloudShare used to have an even better deal -- a free plan -- but it was sadly discontinued earlier this year.

This brings us to another challenge: In the cloud, things change quite often and without much notice. Just because you went to a particular website and got one quote today doesn't mean that the vendor won't adjust things tomorrow and render all your research obsolete. Amazon, for example, is actually fond of reducing its prices quite frequently as it buys new and cheaper equipment.

Being billed for the cloud you use
Another question to ask: Are you being billed only for VMs that are up and running or for everything all the time? Verizon's Computing as a Service SMB offering, for example, charges for all VMs whether or not they are actually turned on. If you are looking to try out a test VM environment and then turn it off, it would be wise to use a provider like Amazon that doesn't bill around the clock. A single test Windows Server cost me around $100 per month, which is more than you'd pay using some competitors. The Verizon CaaS main dashboard, however, does make it very easy to see what resources are in your cloud: 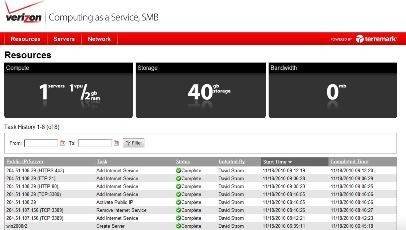 Figure 2: The dashboard of Verizon's Computing as a Service SMB (Click to enlarge)

Verizon's cloud offering is based on the Terremark and VMware vCloud platform. Interestingly, although the telco purchased Terremark earlier this year, a completely different pricing scheme is shown on Terremark's website.

GoGrid offers a slightly different pricing scheme called RAM Hours, which is the amount of RAM deployed multiplied by the number of hours that it is running. Each of its pricing plans includes a fixed number of RAM Hours; if you go over that total, you get charged for the overage. GoGrid also supplies a calculator to estimate your bill. 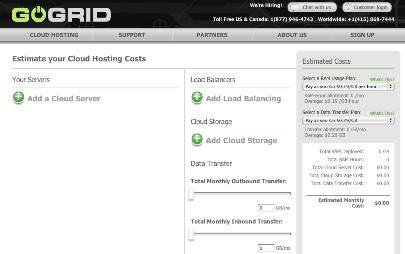 Extra changes for cloud licenses
You also need to explain any surcharges for particular OS instances. Each cloud vendor has a different way to handle passing the cost of its licenses on to you; the best deal is CloudShare, which doesn't add on anything. But Terremark, for example, charges extra for using their Windows templates. That price ranges from $19 per month for the simplest configuration up to nearly $500 per month for a full-fledged Windows server with multiple virtual CPUs. It can be a big help to envision precisely the configuration of the VM that you want to place in the cloud.

For relatively simple OS configurations that use only a few Web applications, it might be more economical to skip the cloud entirely and use one of the shared Web hosting plans from major domain providers such as Go Daddy. You can get a basic 10 GB of storage on a Windows or Linux machine for less than $5 per month with no additional bandwidth or storage charges.

Finally, take a look at all available offerings and understand how each vendor's various plans fit together. We have Amazon's numerous services, but even Rackspace offers two plans: one for simple file storage called Cloud Files and a more general cloud computing plan called Cloud Servers. Cloud Files starts at 15 cents per GB per month plus bandwidth usage charges, while Cloud Servers starts at $10.95 per month plus other charges. And like the other providers, Rackspace also has its own pricing calculator. 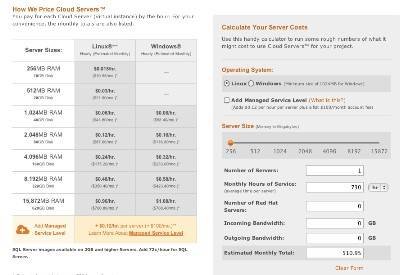 As you can see, price comparison shopping isn't simple. There are many other factors to consider, including 24/7 live support and the various remote access plans offered by each vendor. Make sure you understand all the various dimensions of the environment you intend to create in the cloud -- disk storage, bandwidth, CPU usage and so forth -- before you sign up with a particular provider. Use the calculators from Amazon, GoGrid and Rackspace as starting points to test your assumptions and predict your costs, and consider one of the fixed pricing vendors if all this makes you nervous.

ABOUT THE AUTHOR:
David Strom is an expert on network and Internet technologies and has written and spoken on topics such as VOIP, convergence, email, network management, Internet applications, wireless and Web services for more than 20 years. He has had several editorial management positions for both print and online properties in the enthusiast, gaming, IT, network, channel and electronics industries.