Even though Microsoft made available its Visual Studio 2013 for developers in the fall, it waited until recently to release Visual Studio Online, which enables source code control and simplifies application lifecycle management in Windows Azure.

A Windows Azure-based Visual Studio Online (VSO) public preview is available for Visual Studio 2013, with free basic previews for up to five developers. In a blog post, S. "Soma" Somasegar, corporate vice president of the developer division, described VSO's components, most of which are cloud-based implementations of on-premises Team Foundation Server 2013 features:

Like other Microsoft Software as a Service (SaaS) cloud offerings, such as Office 365, the pre-built, pay-as-you-go Visual Studio Online services minimizes or eliminates upfront costs for computers and related infrastructure and development software. Most developers using Visual Studio on-premises likely will start with a free Visual Studio Online account by signing up at the visualstudio.com site and defining a test project (Figure 1). 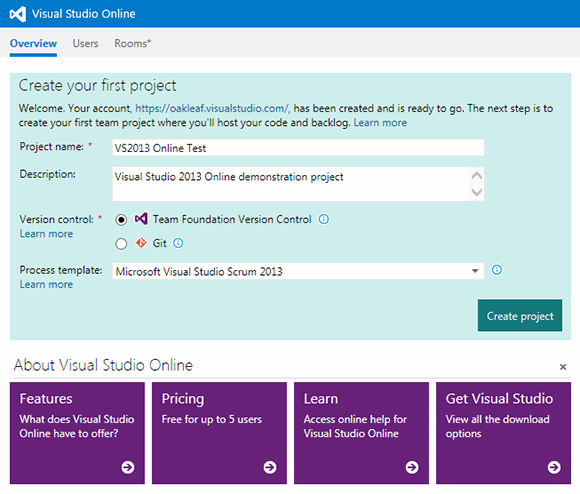 If you've created a SharePoint website with Office 365, you'll be assigned a personalized account URL automatically, such as https://oakleaf.visualstudio.com. To create a new VSO project, type a project name and description and click "Create Project." Click "Allow" to create a local project workspace at \Users\UserName\Source\Workspaces\ProjectName to sync with your online VSO repository.

You can create a VSO account in Windows Azure for any of the following categories:

You can add an unlimited number of Visual Studio Professional, Test Professional, Premium and Ultimate with MSDN subscriptions at no charge to any of the three user plans.

If you're new to source code control for Visual Studio 2013 or don't want to expend resources on upgrading your onsite TFS infrastructure, it's useful to take advantage of the free Basic plan, an existing Visual Studio with MSDN subscription or the 50% preview discount for the Professional or Advanced plans. If you're developing for Windows Azure, you'll find the Build services will increase your deployment efficiency greatly.

About the author:
Roger Jennings is a data-oriented .NET developer and writer, a Windows Azure MVP, principal consultant at OakLeaf Systems and curator of the OakLeaf Systems Inc. and Android MiniPCs and TVBoxes blogs. He's also the author of more than 30 books on the Windows Azure platform, Microsoft operating systems (Windows NT and 2000 Server), databases (SQL Azure, SQL Server and Access), .NET data access, Web services and InfoPath 2003. More than 1.25 million English-language copies of his books are in print, and they have been translated into more than 20 languages.