A few years ago, the IT world was focused on public cloud computing. In 2010, after IT directors expressed concerns over public cloud security issues, the focus shifted to private clouds. And now, because everyone wants operational flexibility, hybrid clouds are at the top of the wish list.

Several recent cloud surveys confirm these high levels of interest in hybrid cloud. A Unisys survey in January 2011 indicated that 21% of IT organizations are focusing on hybrid clouds, and a 2010 Sand Hill Group survey of over 500 IT managers indicates that hybrid cloud use will triple over the next three years. 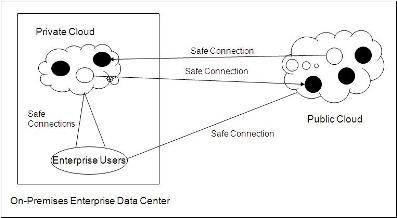 A hybrid cloud could also theoretically consist of multiple private and/or public clouds. The enterprise data center denoted in the illustration may have active servers (virtualized or physical) that are not included in the private cloud.

Addressing the hybrid cloud challenge
The challenge of hybrid computing is to provide seamless operation across platforms, cloud application programming interfaces (APIs) and hypervisors. Users prefer to use their data center tools to manage hybrid cloud environments. Ideally, they want to be able to create applications, or move existing applications between the clouds in a hybrid cloud environment, without having to change anything serious like networking, security policies, operational processes or management/monitoring tools. This is a problem because, due to issues around interoperability, mobility and differing APIs, tools, policies and processes, hybrid clouds generally increase complexity.

In the second half of this two-part tutorial on hybrid cloud, we take a look at the most prominent hybrid cloud options available on the market and determine the best use case for a hybrid cloud computing offering.

ABOUT THE AUTHOR:
Bill Claybrook is a marketing research analyst with more than 30 years of experience in the computer industry, with the last 10 years in Linux and open source. From 1999 to 2004, Bill was Research Director of Linux and Open Source at Aberdeen Group in Boston. He resigned his competitive analyst/Linux product marketing position at Novell in June 2009 after spending over four and a half years at the company. He is now president of New River Marketing Research in Concord, Mass. He holds a doctorate in computer science.

Here's how a hybrid cloud can improve storage performance